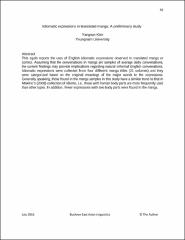 This squib reports the uses of English idiomatic expressions observed in translated manga or comics. Assuming that the conversations in manga are samples of average daily conversations, the current findings may provide implications regarding natural informal English conversations. Idiomatic expressions were collected from four different manga titles (21 volumes) and they were categorized based on the original meanings of the major words in the expressions. Generally speaking, those found in the manga samples in this study have a similar trend to that in Makino's (2008) collection of idioms, i.e., those with human body parts are more frequently used than other types. In addition, fewer expressions with two body parts were found in the manga.