Referring to Cinderella in L2 Japanese: A preliminary study 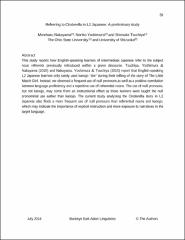 This study reports how English-speaking learners of intermediate Japanese refer to the subject noun referents previously introduced within a given discourse. Tsuchiya, Yoshimura & Nakayama (2015) and Nakayama, Yoshimura & Tsuchiya (2015) report that English-speaking L2 Japanese learners only rarely used kanojo 'she' during their telling of the story of The Little Match Girl. Instead, we observed a frequent use of null pronouns as well as a positive correlation between language proficiency and a repetitive use of referential nouns. The use of null pronouns, but not kanojo, may come from an instructional effect as those learners were taught the null pronominal use earlier than kanojo. The current study analyzing the Cinderella story in L2 Japanese also finds a more frequent use of null pronouns than referential nouns and kanojo, which may indicate the importance of explicit instruction and more exposure to narratives in the target language.