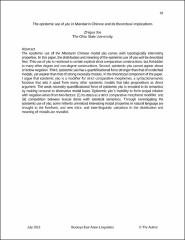 The epistemic use of the Mandarin Chinese modal yào comes with typologically interesting properties. In this paper, the distribution and meaning of the epistemic use of yào will be described first. This use of yào is restricted to certain explicit strict comparative constructions, but forbidden in many other degree and non-degree constructions. Second, epistemic yào cannot appear above or below negation. Third, epistemic yào has a quantificational force stronger than that of existential modals, yet weaker than that of strong necessity modals. In the theoretical component of the paper, I argue that epistemic yào is a modifier for strict comparative morphemes, a syntactic/semantic function that sets it apart from many other epistemic modals that take propositions as direct argument. The weak necessity quantificational force of epistemic yào is encoded in its semantics by making recourse to alternative modal bases. Epistemic yào's inability to form scopal relation with negation arises from two factors: (i) its status as a strict comparative morpheme modifier, and (ii) competition between lexical items with identical semantics. Through investigating the epistemic use of yào, some hitherto unnoticed interesting modal properties in natural language are brought to the forefront, and new intra- and inter-linguistic variations in the distribution and meaning of modals are revealed.