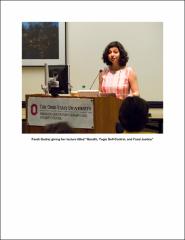 M. K. Gandhi is not traditionally thought of as a theorist of food politics or food justice. Yet, Gandhi had much to say about the relationship between food and power. In this essay, I will explore productive intersections between Gandhi’s thought and contemporary discourses of food politics. I will highlight the manner in which Gandhi’s writings on food anticipate contemporary biopolitical concerns, pointing to the body as a site for exertion of power by modern civilization and its attendant components: the state, capital, science, biomedicine, technology and so forth. also demonstrate how Gandhi enlists the notions of self-discipline, self-mastery and self-inquiry from India’s yogic traditions, reinterpreting them as specifically political solutions for the incursions of modern civilization and imperial rule into the body. Finally, I seek to problematize Gandhi’s yogic solution, asking how it might speak to contemporary critiques of neoliberalism within food scholarship.