The Amish Settlement in Honduras, 1968-1978: A (Half) Failed Attempt to Develop an Amish Understanding of Mission 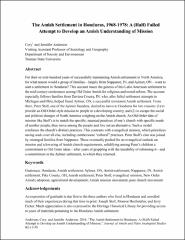 For their several-hundred years of successfully maintaining Amish settlements in North America, for what reason would a group of families—largely from Nappanee, IN, and Aylmer, ON—want to start a settlement in Honduras? This account traces the genesis of this Latin American settlement to the mid-century restlessness among Old Order Amish for religious and moral reform. The account especially follows families from Daviess County, IN, who, after failed settlement attempts in Michigan and Ohio, helped found Aylmer, ON, a successful revisionist Amish settlement. From there, Peter Stoll, one of the Aylmer founders, desired to move to Honduras for two reasons: (1) to provide an Old Order-style mission to people in a developing country, and (2) to escape the social and political changes of North America weighing on the Amish church. An Old Order idea of mission like Stoll's is to match the specific, nuanced practices of one's church with specific needs of another people, then move among the people and live out an alternative. Such a model reinforces the church's distinct practices. This contrasts with evangelical mission, which prioritizes saving souls over all else, including cumbersome "cultural" practices. Peter Stoll's clan was joined by estranged families from Nappanee. These eventually pushed for an evangelical outlook on mission and a lowering of Amish church requirements, solidifying among Peter's children a commitment to Old Order ideas—after years of grappling with the instability of reforming it—and a commitment to the Aylmer settlement, to which they returned.