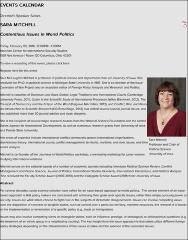 For several decades, social science scholars have called for an issue-based approach to world politics. The central element of an issue-based approach is that policy makers are concerned with achieving their goals over specific issues, rather than simply pursuing power or security. Issues are what states choose to fight over or the subjects of diplomatic disagreements. Issues can involve competing views over the disposition of concrete or tangible stakes, such as control over a particular territory, maritime resources, the removal of a leader, or the implementation or termination of a specific policy (e.g., trade or immigration). Issues may also involve competing views on intangible stakes, such as influence, prestige, or ideological, or philosophical questions (e.g. the treatment of an ethnic group in a neighboring country). The key insight from the issue approach is that states utilize different foreign policy strategies depending on the characteristics of the issues at stake and the salience of the contested issues. In this talk, I describe the issue approach to world politics, describe how it differs from other major theories of interstate conflict, present new data on contentious issues from the Issue Correlates of War Project, and then explain how the issue approach confirms some conventional ideas about interstate conflict, but also identifies a series of counter-intuitive results that existing theories cannot fully explain.