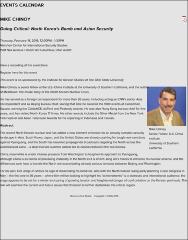 The recent North Korean nuclear test has added a new element of tension to an already complex security landscape in Asia. South Korea, Japan, and the United States are already pushing for tough new sanctions against Pyongyang, and the South has resumed propaganda broadcasts targeting the North across the Demilitarized Zone -- a step that last summer almost led to clashes between the two Koreas. China, meanwhile is under intense pressure from Washington to toughen its approach to Pyongyang, although China is as fearful of provoking instability in the North as it is of Kim Jong Un's moves to enhance his nuclear arsenal, and the differences over how to handle the North are exacerbating already serious tensions between Beijing and Washington. For his part, Kim Jong Un shows no sign of moderating his behavior. And with the North Korean ruling party planning a rare congress in May -- the first one in 36 years -- where Kim will be looking to highlight his "achievements" to a domestic and international audience, the stage appears to be set for a winter and spring of growing tension and heightened danger of confrontation on the Korean peninsula. This talk will examine the current and future issues that threaten to further destabilize this critical region.