Beyond Religious Freedom: The New Global Politics of Religion 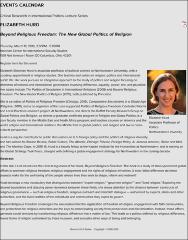 In this talk, Hurd introduces the central argument of her book, Beyond Religious Freedom. The book is a study of state-sponsored global efforts to promote religious freedom, religious engagement and the rights of religious minorities. It asks: What difference do these projects make for the well-being of the people whose lives they seek to shape, reform and redeem? Hurd develops a new vocabulary that distinguishes between "expert religion," "governed religion" and "lived religion." Exploring the blurred boundaries and dizzying power dynamics between these fields, she draws attention to the distance between constructs of religious governance — such as religious freedom, religious outreach and interfaith dialogue — authorized by experts, states and other authorities, and the lived realities of the individuals and communities they aspire to govern. Beyond Religious Freedom challenges the assumption that the legalization of freedom of religion, engagement with faith communities, and protections for religious minorities are the keys to emancipating society from persecution and discrimination. Instead, these efforts generate social tensions by transforming religious difference into a matter of law. This leads to a politics defined by religious difference, favors forms of religion authorized by those in power, and excludes other ways of being and belonging.