From Friends to Foes: What Russians Think About the United States and Which Foreign Policies They Support 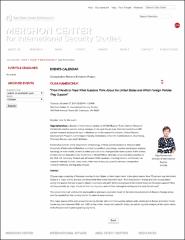 25 years ago a majority of Russians saw the United States as their major friend in the global arena. Now 75 percent say the United States is a major enemy and are convinced that Americans hate them back. What happened in Russia and with its population during this period that led to such a drastic reversal in attitude? Which policy toward the United States do Russians support? Who do they consider as major friends of their country now, and will they manage to reintegrate the post-Soviet area? The presentation will address the socio-political and socio-economic basis for the latest developments in Russia’s foreign policy and the capabilities this country has for its external assertiveness. The major source of the data presented during the talk will come from weekly opinion polls conducted in Russia and other former Soviet republics between 1990 and 2015, in the United States and some EU states, as well as big data analysis of the social media in the Russian and English-speaking segments.