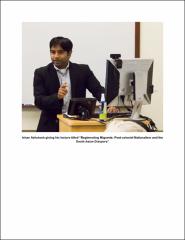 This talk examines the shifting relations between the Indian nation-state and the South Asian diaspora. Following the liberalization of the Indian economy in 1991, the Indian diaspora began to play a central role in post-colonial nation-building. No longer held at arm's length from the post-colonial state, the de-facto position of the Indian government since partition and independence in 1947, today the Indian state treats its diaspora as a resource that plays a crucial role in economic reforms, particularly in the search for foreign investment and new consumer markets in India. As Ashutosh will discuss, the Indian diaspora, whose population stands at approximately 25 million people, is not entirely re-integrated into the Indian nation, however. Rather, elite segments, particularly those in the United States, are targeted as reflective of the "Global Indian." Even for these groups, the government of India has introduced a number of cultural programs and tiers of citizenship that stop short of granting full citizenship to its diaspora. Ashutosh will consider how these relations continue to signal an ambivalence between national belonging and diasporic incorporation. He will also look at how the changing status of the Indian diaspora vis-a-vis the Indian nation-state produces new divisions within the South Asian diaspora.