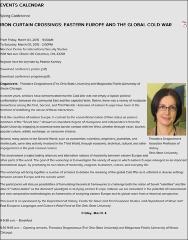 The goal of this workshop is to investigate the variety of ways in which eastern Europe emerged as an important international player, by promoting its own ideas of modernity, progress, humanism, culture, and everyday life. This workshop will bring together a number of scholars to debate the meaning of the global Cold War as it unfolded in diverse settings between eastern Europe and the outside world. The participants will discuss possibilities of formulating theoretical frameworks to challenge both the notion of Soviet “satellites” and the idea of “nation-states” as the dominant paradigms in studying eastern Europe. Instead, we are interested in the potential of transnational and new comparative methodologies as frameworks of analyzing eastern Europe and its global reach from a historical perspective.