War Without Humans: From Liberal War to the Constitution of Global Imperial Sovereignty 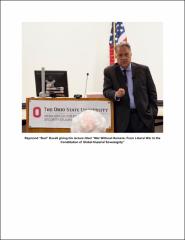 Military security policy is in flux, and the changes exhibit a seeming paradox.  On the one hand, component of the nuclear weapons arsenal of the United States -- the bedrock of deterrent stability for decades -- are falling into disrepair, as if international war were becoming obsolete. On the other hand, and at precisely the same time, we learn almost weekly of U.S. drone-borne missile attacks, expressive of what President Obama characterizes as a war that will be prosecuted for the long term and what some analysts describe as the new normal of perpetual war. It is apparent that how foreign policy makers and military strategists think about, imagine and prepare for war is changing notably.Duvall will address the newly emerging conceptualization of war. He asks how this emerging image -- which he calls war without humans, in which humans are largely removed from direct participation on the battlefield through the use of drones, battlefield robotics, cyber warfare, and the weaponization of orbital space -- affects the constitutive foundation of the nation-state system, the principle of territorial state sovereignty. The book he is writing shows that war without humans becomes a dominant conception -- and practice--of war, it erodes the fundamental principle of territorally sovereign state and the nation-state system that that principle sustains.In place of territorial state sovereignty, this conception bolsters the development of a distinct structure of global authority -- a globally centralized, but de-territoralized, imperial form that I call empire of the future. The ultimate paradox then is that far from replacing sovereign power, war without humans gives risk to a potentially more sinister form of sovereign power.