Continuity or Prelude to Electoral Turmoil? 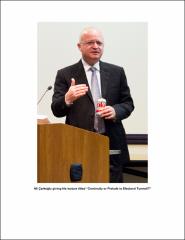 Turkey is going through an election storm. Since March 2014 the country is set to go for a fourth election in November 1, 2015. The parliamentary election in June 2015 resulted in a 10 percentage point loss for the ruling conservative pro-Islamist Justice and Development Party (Adalet ve Kalkınma Partisi-AKP), necessitating a minority or coalition government for the first time since 1999. Coalition negotiations failed, and the first popularly elected president of the country called for a "repeat" election. Since the two parties that scored significant gains in June 2015 elections are at polar opposites of the ideological spectrum, coalition negotiations are difficult to conduct, and the country faces increasing political polarization and turmoil unless the impending November 2015 elections lead to a new consolidation of electoral support behind one of the four major parties. Among the two winners of June 2015 elections, the Nationalist Action Party (Milliyetçi Hareket Partisi-MHP), which garnered about 16 percent of the vote (up from about 13 percent in 2011), is a Turkish ultra-nationalist party with ideology rooted in the Grey Wolves (Bozkurtlar) and Idealist Hearths (Ülkü Ocakları) of the early 1960s and 1970s. The Peoples Democratic Party (Halkları Demokratik Partisi-HDP), which reached about 13 percent of the vote, is a democratic socialist and anti-capitalist pro-Kurdish party that follows the heritage of a number of earlier Kurdish nationalist political parties that typically obtained about 5-7 percent in earlier elections.The main opposition party, the social-democratic and Kemalist Republican Peoples Party (Cumhuriyet Halk Partisi-CHP) garnered about 25 percent of the vote remaining at about the same level of its electoral support in the 2011 elections. This paper uses pre- and post-June 2015 election panel survey data to account for determinants of vote choice in Turkey. How do the bases of electoral support change from one party to another? Are short-term economic evaluations more relevant than long-term ideological preferences in shaping party preferences? What accounts for temporal shifts in party preferences between the two waves of our panel survey between March-April and July–September 2015, going into the November 1 elections? The paper aims to address these questions and contextualize the significance of the election storm for the larger shape of Turkish politics in the future.