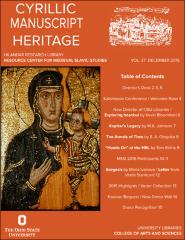 Biannual newsletter of the Hilandar Research Library (HRL) and the Resource Center for Medieval Slavic Studies (RCMSS), The Ohio State University. Includes: features by guest contributors, which appear under the column heading of "HRL Journal" – where Cyrillic Manuscript Heritage asks researchers who have used the resources of the HRL in the past year or so to describe their experience and work; a column, "Director's Desk," by the Director of RCMSS; Reports on recent visitors, research, events, exhibits, projects, updates, etc.; Contributors to both the Hilandar Endowment Fund and Hilandar's Friends of the Library Fund are listed, as are donors of "Gifts in Kind." Also included are seasonal announcements regarding the International Hilandar Conference series and the Medieval Slavic Summer Institute.

CMH 37 cover design based on the cover design of CMH 34 created by Eva Dujardin Dale.
Note that in 2015, only one issue appeared of the biannual newsletter appeared: Cyrillic Manuscript Heritage 37 (December 2015). This issue contains information and photos of the Eighth Biennial Medieval Slavic Summer Institute, which was held during the summer of 2015.