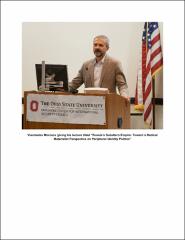 This presentation will use as the point of departure the concept of subaltern imperialism, developed in my recent book (Russia's Postcolonial Identity:  A Subaltern Empire in a Eurocentric World, Palgrave 2015). The value of this approach consists in highlighting the fact that Russia, in spite of its great power identity and imperial ambition, has been unable to overcome economic and normative dependency on the West.The Russian state has colonized its own periphery on behalf of the Western core, as part of uneven and combined development of global capitalism. This perspective is closely related to my ongoing research on Putinism as a passive revolution, drawing on Antonio Gramsci and Ernesto Laclau. My key argument is that the national agenda in all recent Russian political transformation has been displaced by the question of how to relate to the West, which results in a vicious circle of repeated attempts to catch-up modernization followed by anti-Western reaction.In order to fully account for the scale and persistence of this phenomenon, one has to navigate between non-reflexive Eurocentrism of transitology and the postcolonial/civilization critique that gravitates toward relativism. I believe that Gramsci's work on the intellectuals and his concept of the national-popular, coupled with Laclau's theory of populism, can help theorize a way out of this dead end.