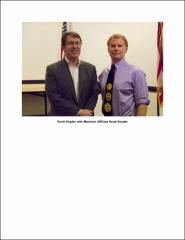 Japan and South Korea are Western-style democracies with open-market economies committed to the rule of law.  They are also U.S. allies.  Yet despite their common interests, shared values, and geographic proximity, divergent national identities have fractured relations between them.  In this talk, Snyder will investigate the roots of the split and its ongoing threat to the region and the world.Snyder isolates competing notions of national identity as the main obstacle to a productive Japan-South Korea partnership. Through public opinion data, interviews, and years of observation, he argues that incompatible, rapidly changing conceptions of national identity in Japan and South Korea have complicated territorial claims and international policy. Despite changes in Japan's and South Korea's leaderships and both governments' concerted efforts to encourage U.S.-ROK-Japan security cooperation, he concludes, the Japan-Korea relationship continues to be hobbled by history and national identity.