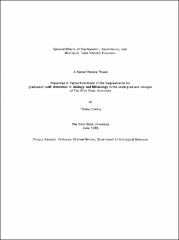 In recent years, geochemists have become increasingly interested in describing the processes that effect the chemistry of evolving magmas. As research in this field has progressed, it has become apparent that fractional crystallization cannot account for all the geochemical variations present in lavas. Increasingly, geologists have begun to look at other processes, such as assimilation and magma mixing, to explain the development of a variety of lavas. However, no one has attempted to describe the effects that these processes might have in combination. This thesis is an attempt to describe the general effects that combined fractionation, assimilation and mixing might have on an evolving magma body. Detailed models simulating the processes of combined fractionation, assimilation, and mixing were developed using the modified equations of O'Hara and Mathews (1981). These models were used in analysing data obtained from Patmos Dodecanesos, Greece. Patmos, a volcanic island in the south eastern Agean Sea, is composed of alkaline volcanics. Previous studies by Wyers and Barton (1986, 1987) indicate that assimilation and mixing have affected the chemistry of Patmos, making the geochemical data obtained from Patmos ideal for modeling. The development of apparent isochrons in recent lavas using combined AFC and mixing models illustrates the importance of understanding these processes and their effects on magma chemistry. Further, models developed during this research reveal that magma mixing greatly complicates the analyses of volcanic rocks generating predominately non-linear trace element trends.