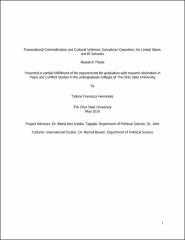 Many of the 20,777 Salvadorans who are deported from the U.S. on average each year since 2007 haven’t been convicted of a crime and only a tiny fraction are suspected gang affiliates. However, these deportees are criminalized upon return to El Salvador. Currently, there is little literature that addresses why this phenomena occurs. This study explores cultural violence, which takes the form of discourses and rhetoric that serve to legitimate this treatment of Salvadoran deportees. This research reveals that two complementing discourses are used by the Salvadoran government against deportees. The Salvadoran government has created and shaped the idea of the model neoliberal emigrant, which excludes deportees as unworthy burdens on the country. Furthermore, the Salvadoran government conflates deportee with gang member and criminal, blaming deportees for violence in the country.