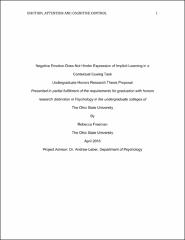 The efficiency of everyday visual search has been shown by previous studies to depend heavily on the context. Repeating contexts in a search task over time allows targets to be found more quickly within a familiar display versus a random display, an effect measured with a contextual cueing task. Research has shown that emotion can have a significant impact on this effect. This study aims to investigate further the effect of negative emotion on contextual cueing learning as well as the expression of learning. A contextual cueing task was administered to participants (N = 39) twice. Session one involved a baseline 1-hour contextual cueing task for all participants, with no emotional images. Two types of displays were used: nonpredictive (randomized) and predictive (repeating). Session two (1-7 days later) involved another contextual cueing task with interspersed presentation of International Affective Picture System photographic stimuli to induce either a neutral (N = 20) or negative (N = 19) mood. Three types of displays were used: nonpredictive, predictive, and old (predictive display that was previously learned in session one). All participants completed the Positive And Negative Affect Schedule, which confirmed that affective state differed significantly between the two groups. Analysis of variance revealed that in session one, RTs for predictive displays and nonpredictive displays differed significantly, demonstrating a contextual cueing effect. Session two showed that the benefit for old displays when compared to nonpredictive displays was the same for both groups, demonstrating that expression of previous learning was not influenced by negative emotion. Unexpectedly, there was no difference in either group between nonpredictive and predictive displays, indicating that interspersing photographic stimuli may impair new learning. Data from this study will be important in future studies, as it raises important questions on emotional interaction with the mechanism of learning versus the expression of learning.