'Their privilege is their loss': Placing the intellectual in development theory and practice 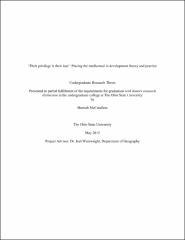 This study was born from an attempt to situate my own voice in development theory and practice following a year spent in Arusha, Tanzania. I struggled to justify a desire to address the needs of the poor within an ideological framework of postcolonial and Marxist theory. I turned to Gayatri Chakravorty Spivak’s 1988 essay, ‘Can the Subaltern Speak?’ which offers a critique of the role of the Western intellectual as representative of the subaltern. By examining the relationship between power, interest, and desire, Spivak submits that in attempt to critique the West as subject, certain Western intellectuals haphazardly reinforce it. As such, the subaltern cannot speak. Spivak calls particular attention to the plight of the subaltern woman and calls on female intellectuals to critique the positionality of Western intellectuals who attempt to transcend representation. One purpose of this study is to examine how a contemporary capitalist driven development agenda that aims to empower women suffers many of the same failings as the Western intellectual attempting to speak for the subaltern. Such efforts are examples of what Spivak calls ‘white men saving brown women from brown men’ through the establishment of ‘good societies’ in which good is conflated with Western. However, a more pressing purpose of this study has been to intentionally explore my own positionality as a Western female intellectual attempting to navigate my own potential contribution to development practice and theory. To address this problem, I offer a critical reading of Spivak’s essay and reflect on the ways these concepts manifest in development practice, calling into consideration the Millennium and Sustainable Development Goals as well as my experience working in the field in Arusha, Tanzania. I find, just as Spivak found for the postcolonial intellectuals, my privilege is my loss. I discuss the process of unlearning my own female privilege as I recognize that my femaleness is not enough to allow me to listen to and speak for the subaltern woman. Finally, I find that as a female development theorist and practitioner, I must continuously strive to unlearn my female privilege in order to place my own desires, interests, and place of power as a white women working in an industry that attempts to save brown women from brown men.