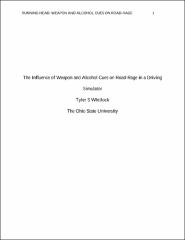 Vehicular crashes are a growing problem in the United States, with an increase of over 10,000 crashes from 2013 to 2014 (Kasich & Born, 2015). One factor implicated in vehicle crashes is aggressive driving. Previous studies of aggressive driving have largely relied on self-reports and after-the-fact analyses. The present study attempts to obtain a more reliable measure of aggressive driving in real time, and to determine whether this behavior is affected by stimuli in the environment. In other studies of aggressive behavior (Subra et al., 2010), features such as the presence of alcohol bottles and weapons have increased aggression. In addition, aggressive behavior seems to be more characteristic of individuals with strong narcissistic personality traits. The present study examined the impact of alcohol cues, weapon cues, and individual differences in narcissism on driving behavior in a driving simulator. Forty university students first completed an online questionnaire that consisted of several narcissism and aggression scales. Participants then drove a pre-designed scenario with instructions to reach the end of the scenario as quickly as possible. Participants were exposed to billboards in the scenario containing advertisements featuring either alcoholic or non-alcoholic beverages, and with either a handgun or a tennis racket on the passenger seat. Driving behavior was measured by examining speed, smoothness of steering, and following distance during driving. Results indicated that the presence of the gun increased driving speed and tailgating behavior, but surprisingly, the presence of non-alcoholic billboards actually produced higher speed and more tailgating behavior. Smoothness of steering was not significantly affected by weapon or alcohol cues.

Social and Behavioral Sciences scholarship from The Ohio State University