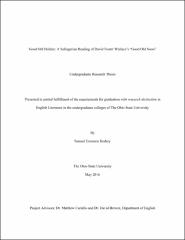 Opportunities abound for placing Salinger and Wallace in critical conversation within the larger context of American literary culture, but several explicit textual connections between the two iconic authors require exploration. The weightiest example is Wallace’s “Good Old Neon,” which engages with various Salinger texts by employing similar tone, themes, and motifs through the voice of a brilliant narrator struggling with meaning and identity. I present a close reading of the story through a Salingerian lens, informed specifically by The Catcher in the Rye and the Glass family saga, using William Weigand’s diagnosis of “banana fever” to sketch the archetypal Salinger hero. By mimicking Salinger’s tone and alluding to scattered motifs across his fiction, the text engages both structurally and thematically with Salinger throughout his published career, presenting the reader with a protagonist who stands alongside Seymour, Buddy, and Holden. Furthermore, Wallace’s movement from the postmodern world of hip detachment reflects his broader aims for a fiction that breaks through clever irony and unsentimentality to a new sincerity, manifesting in a metafictional move that mirrors Salinger’s Glass family saga. I find that “Good Old Neon” should be identified as Wallace’s Salinger story. Through this comparative reading, a step can be made in placing Salinger’s works in conversation with authors who actively published during his period of seclusion, opening new potential avenues for dealing with his forthcoming posthumous texts.