Grain Size Analysis of Submarine Landslides in the Nankai Trough 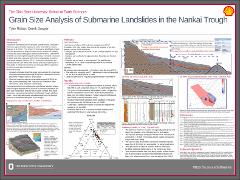 A two part investigation of a mass transport deposit (MTD) in the Nankai Trough, offshore Japan was conducted to learn more about the dynamic behavior of submarine landslides. Hydrometer analysis of 50 sediment samples from the Integrated Ocean Drilling Program (IODP) Expedition 333, Site C0018 was completed with the objective to determine the grain size distribution within a prominent mass transport deposit (MTD-B). Core samples were collected from 90.17 to 191.17 meters below the seafloor (mbsf) with approximately 1 sample per 1 meter collected inside MTD-B. MTD-B was also cored at Site C0021, IODP Expedition 338 providing a valuable opportunity to study a single MTD from two different locations. With the aid of seismic data it was confirmed that both Site C0018 and Site C0021 cored MTD-B. The grain size analysis indicates two major lithologies: clayey silt (78% of samples) and silty clay (15% of samples). The grain size results acquired from Site C0018 were very similar to Site C0021. Both data sets showed a pattern of fining upward inside of the MTD. The grain size analysis of Site C0018 also revealed a defining volcanic ash layer that underlies MTD-B. This observation motivated the second part of this investigation. This second part of this investigation utilized 3D seismic data to examine the discovered volcanic ash layer. This was done with the objective to determine its role in the mobilization of MTD-B. Through examination of the seismic data it can be seen that the ash layer is displaced by MTD-B before reaching Site C0021. With the discovery of the volcanic ash layer underlying MTD-B it became important to determine the volcanic ash’s role in not only in the mobilization of MTD-B, but also in the mobilization of other landslides throughout the Nankai Trough region. With 3D seismic data the volcanic ash horizon was able to be mapped throughout the Nankai Trough seismic survey area. With the horizon mapped it was possible to locate another landslide that is positioned on-top of the same volcanic ash layer, exemplifying how the discovered ash layer may have been a weak layer allowing submarine landslides to mobilize throughout the region.