Dravidian Influence on Indo-Aryan: The Case of the Dative-Subject Construction 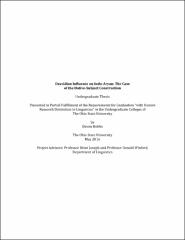 Historical language contact between the Indo-Aryan and Dravidian languages of South Asia has been written about extensively. Previous literature, however, has focused largely on possible Dravidian contact-induced features in Old Indo-Aryan (namely Vedic and Classical Sanskrit). Much less work has been done to sort out the extent of Dravidian influence on Indo-Aryan at later stages in its development. In many cases, as well, the previous literature has not adopted a sufficiently principled approach to the identification and investigation of these putative Dravidian contact-induced features. This thesis addresses these shortcoming in the previous literature by first developing a general theoretical framework for the holistic study of historical contact-induced features in language, and then by beginning to apply this framework to the case study of the origin and spread of the dative-subject construction in Indo-Aryan, an areal feature of South Asia which I argue began emerging in early New Indo-Aryan due, in part, to contact with Dravidian.