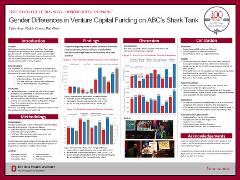 ABC Network’s reality television show “Shark Tank” gives entrepreneurs the opportunity to pitch their ideas to a panel of investors for the chance to receive funding. Each season more than 35,000 entrepreneurs apply to be on the show. Whether they receive an offer for funding or not, they still stand to gain the free advertising that comes with appearing on a show with more than seven million average viewers per episode. Although there are abundant resources for knowledge on Shark Tank, women in venture capital, and behavioral gender differences, sources are lacking on gender differences in venture capital funding on Shark Tank. The purpose of this research is to determine if differences exist in how entrepreneurs receive funding based on their gender. To analyze this, I utilized two publicly available datasets containing information on the pitches aired on the show. These datasets were cleansed and merged to form one data set with thirty-five variables spanning across four seasons and 235 pitches. I found that despite having comparable or better businesses than their male counterparts, women ask for lower valuations and accept deals at a lesser percentage of what they asked for compared to men. Explanations for these differences were considered in regards to the industry, sharks, entrepreneurs, and society. This information can be applied to benefit entrepreneurs in search of venture capital, and specifically, future contestants on the show. Going forward this research can be improved by coding for more variables and including data from the rest of the seasons.