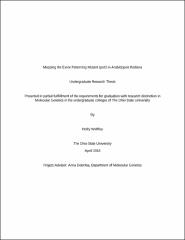 Exine, the outer cell wall of pollen, forms diverse patterns in different plant species and is important for plant reproduction. Exine is composed of sporopollenin, a material noted for its strength, elasticity, and chemical durability, making it attractive to biologists and material scientists. However, little is known about the developmental and biochemical aspects of exine formation. The aim of this project was to identify one of the genes involved in this process. In a previous genetic screen of Arabidopsis thaliana, a mutant with a spotty pollen phenotype that had largely disconnected exine elements was identified and named spot3. The spot3 mutation was coarsely mapped to the bottom of chromosome 1. In order to locate the spot3 mutation in the Arabidopsis genome, a F2 mapping population of spot3 mutant plants was created. spot3 plants from that population were analyzed with molecular markers in order to reduce the interval containing the spot3 mutation. Afterwards, candidate genes were sequenced and compared to wild-type sequences to identify any present mutations. Available mutant plants with T-DNA insertions in candidate genes were screened for the spot3 phenotype. In addition to these approaches, bulked genomic DNA from spot3 mutants was studied with next generation sequencing analysis. Use of these techniques has dramatically decreased the interval containing the spot3 mutation from a 960 kb region with approximately 300 genes to 141 kb with 45 genes.