Learned Inattention and its Impact on Categorization in Children and Adults 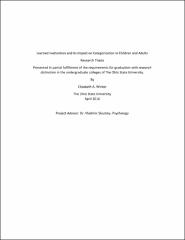 Category learning is vitally important to human cognition because it enables people to apply learned information to new situations. Category learning greatly benefits from the ability to focus on what is relevant to category discrimination and ignore what is irrelevant, or selective attention. However, a consequence of this ability is learned inattention; this is a tendency to continue ignoring information that was previously learned to be unimportant, even after it becomes relevant. This pattern of attention is in contrast to distributed attention, demonstrated in infants and young children, where everything is observed with equal importance. An important question remains: when in development does category learning shift from being sub-served by distributed attention to being sub-served by selective attention. We investigated these phenomena through two experiments: first, we used behavioral testing with 5-year-old children and undergraduates; and second, we used eye-tracking technology with a separate sample of undergraduates. All participants were tasked to learn two artificial categories which had two features that were relevant to category discrimination and two features that were irrelevant. Participants were advised to focus on the features of the stimuli but they were not told which features were relevant or irrelevant. They were also given feedback on their accuracy during learning trials. In a second phase, participants had to learn two new categories where the former irrelevant and relevant features were switched. Participants were alerted that a change had occurred, but they were not told that the features changed in relevancy. The experiment was designed to run on both adults and children, framed as a computer game. Data from Experiment 1 indicated that both adults and five year old children were able to use selective attention to learn these categories. Eye tracking data from Experiment 2 supported these results by indicating that adults were in fact selectively attending to relevant features in order to discriminate categories.