Why does predator abundance increase after invasion of a non-native prey? 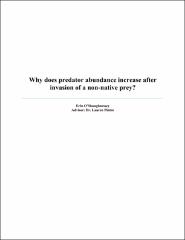 Invasive species have been shown to have substantial effects on native food webs though their potential roles as novel predators or novel prey. As novel prey, invasive species have been recently shown to cause native predator populations to increase in abundance and growth rate following introduction. However, we know little about whether the magnitude of the effect of invasive species as novel prey depends on particular traits of native predator species. The goal of this study was to conduct a literature search to identify the characteristics of native predators that might influence the magnitude of effect that non-native prey might have on predator abundance. Specifically, we recorded whether a predator was a generalist or specialist and then quantified the number of different prey types consumed by that native predator. In general, the lowest level of taxonomic resolution that could be obtained for most prey consumed by predators in the dataset was Order. We conducted a simple linear regression to look at whether the number of orders consumed by a predator explained variation in the magnitude of effect size that a non-native, prey species had on the predator’s abundance. Results suggest that there is no relationship between the number of taxonomic orders consumed by the predator and the estimated effect size of a non-native prey on the native predator. There is, however, a relationship between whether a predator is a carnivore or omnivore and their change in abundance. Carnivorous predators exhibited a larger change in effect size post invasion of a non-native prey. Future work may be aimed at understanding whether different classifications of generalist or specialist predators influence the effect of non-native prey on native predators. The long-term goal of this work is to determine why and how specific predators benefit from exotic species as prey.