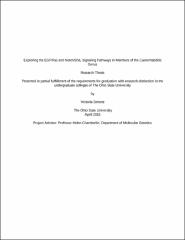 Many pathways exist in animal systems for cells to communicate and facilitate proper cell division; two such pathways are the EGF/Ras pathway and the Notch/DSL pathway, both of which are crucial to proper vulval development in nematodes of the Caenorhabditis genus. These pathways are conserved in humans and many other species as well, making them viable topics for research. This project seeks to study these pathways, especially the diversity of each path, and how the they work together to allow successful vulvagenesis. To examine pathway diversity, evolutionary trees (generated by TreeFam.org) for genes vital to each pathway were collected and compared to each other. This analysis revealed more gene duplication in the Notch pathway among members of the Caenorhabditis genus, while relatively little gene duplication exists in the EGF/Ras pathway. This suggests that the Notch pathway is more flexible, and allows more evolutionary diversity. To test this prediction, I am comparing the function of these pathways between Caenorhabditis elegans and Caenorhabditis briggsae. For studying the EGF/Ras pathway, I am examining the gene lin-3/EGF. Over expression of lin-3/EGF in C. elegans leads to the inappropriate division of epithelial cells. My data show overexpression of C. briggsae lin-3 causes a similar phenotype in both C. elegans and C. briggsae worms. Additionally, during this project new splice variants of the lin-3 gene were discovered in C. elegans, C. briggsae, and C. remanei. Notably, several of these variants either include or exclude a possible processing site. The tools developed in this project will be valuable assets for further studying these critical signaling pathways in various animal systems.