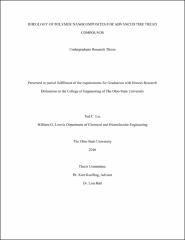 The primary objective of this research was to explore polymer and nanoparticle interactions that effect rheological properties related to increasing grip while decreasing rolling resistance in tires. Generally, grip generates far greater forces than rolling resistance. With the addition of nanocomposites such as silica, however, the material can store more energy at low frequencies and dissipate more energy at higher frequencies. This results in lower rolling resistance while maintaining strong grip. The material that was used is polystyrene and polybutadiene, less complex polymers that are easier to model compared to the commonly used styrene-butadiene rubber (SBR). The nanocomposite that was added to the polymer is silica, which ranges from 5-50 nm and is coated in silane coupling agent. The nanocomposite material was tested with frequencies from 10-1 to 103 Hz and at 200°C. The viscosity, storage and loss modulus, and dissipating factor (tan delta) was calculated using a dynamic frequency sweep test. The results showed that the addition of silica to polystyrene significantly increases the storage modulus of the material at low frequencies, improving rolling resistance. Minimal increases in loss modulus at high frequencies related to grip were noticed. Inconclusive data was found when adding silica to polybutadiene. The results using polystyrene can be utilized as a model for understanding nanoparticle interactions in other complex materials.