When I Grow Up: A Look at Middle School Girls' Patterns in Choosing a Role Model 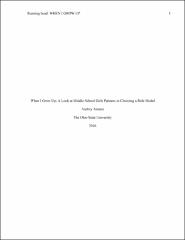 Role models chosen by young girls influence their success in life. Role models can have an important impact on self-esteem and act as a protective factor against risky behavior. Several studies have explored and explained the importance of role models in young people’s lives, especially during formative years. Understanding role modeling can inform the needed relationships for young girls to have a successful future. When I Grow Up: A Look at Middle School Girls’ Patterns in Choosing a Role Model is a study that explores and describes the role models and relationships chosen by middle school girls. Twenty-two individual interviews of female students between the fourth and eighth grades attending a Montessori school in the Midwest were completed. The interview questions pertained to the girls’ relationship to her role model, why she chose that specific role model, qualities she admires in the role model, what is discussed with the role model, and what the girl wants to be when she grows up. The ethnographic data were analyzed through the qualitative method thematic analysis. This form of analysis involves a deductive process through which themes and concepts are coded from the data using a collective comparison process. Themes uncovered through data analysis included the girl’s choice of a woman whom she had near daily exposure, role models were described as having a strong sense-of-self and confidence, the girl interviewee trusted the role model to help her learn problem solving skills and provide support during times of stress, and the role model tended to influence occupational choice.