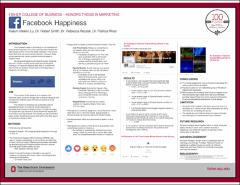 As the world’s largest social networking site, Facebook has reached 1.59 billion monthly active users around the globe as of December 2015. People access Facebook because they want to connect with their friends and family. People want to find happiness on Facebook, but do they? The purpose of this research is to measure how Facebook users’ emotions change after looking at Facebook, and the role played by different types of Facebook posts and its social comparison. The research was conducted online using 128 college students ranging from the ages of 16 to 41. Since Facebook users were exposed to many events throughout the day, researchers believed that there were mainly four types of events that people share on Facebook: Lifetime Events, Special Events, Routine Events and Neutral Events. Participants were randomly assigned to view a Facebook “news feed” full of one of the Lifetime Events, Special Events and Routine Events combined with some Neutral Events. Then they were asked to think about an acquaintance who posted these events on Facebook. Participants reported their positive and negative affect both before and after looking at the Facebook posts, and difference scores were calculated by subtracting the pre-Facebook affect scores from the post-Facebook affect scores. The results of a one sample t-test were shown to be significant and revealed that participants felt a less positive affect after looking at Facebook than they did before looking at Facebook. The results suggest that viewing Facebook decreases a user’s positive emotional state. A correlation test was used to see if comparing with users’ Facebook friends made them feel bad or not, and the results show that Facebook users do not realize that going on Facebook makes them feel worse. Additional research is planned to further examine how different types of Facebook posts may differentially affect positive affect. In conclusion, Facebook viewing has a negative effect on users’ emotional state. Facebook users seem unaware that this is happening, and additional research is planned to shed further light on this effect.