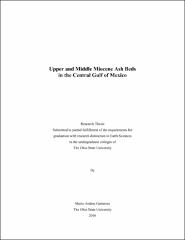 Volcanic ash beds have been widely used as correlation markers in the Paleogene of the western Gulf of Mexico, but their identification and application as regional events in the Neogene play of the deep water Gulf of Mexico have been underutilized. This study approaches this problem through the organization, identification, and correlation of tuffaceous lithologies, supported by available thin sections, SEM images, biostratigraphy, log analysis, and published studies. Tuffaceous lithologies can be recognized with great confidence by calibrating sedimentological evidence with petrophysical properties as observed in well logs. Various beds have been encountered in the Miocene of the central Gulf of Mexico, specifically in the Walker Ridge and Green Canyon protraction areas. Direct or semi-direct evidence of amorphous volcanic glass has been documented from petrographic thin-sections, SEM, and XRD analyses. Tuffaceous lithologies have also been described in mud logs of numerous wells. The next best tool to infer ash beds is the spectral gamma-ray log tool, which reveals a distinct increase in thorium content relative to uranium or potassium in both shales and sandstones. An almost unequivocal petrophysical response to the presence of ash beds is the combination of high GR and low bulk density. Integration of these various lines of evidence within a robust chronostratigraphic framework revealed 11 correlative ash beds in Middle and Late Miocene sandstones and mudstones. Tuffaceous sandstones are preserved in deep-water turbidites and are probably linked to continental ash fall and transport into the Gulf of Mexico. These beds range in thickness from 120 to 250 ft. Tuffaceous mudstones are more likely the result of direct ash fall and preservation in the deep-water environment, and their average thickness is 23 ft. Volcanic activity of the Mid- Late Miocene Yellowstone calderas was the likely source of the volcanic glass found in the tuffaceous lithologies of the central Gulf of Mexico, providing both a long-distance, wind-driven ash fall, and a source-to-sink transport mechanism involving fluvial, deltaic, and deep-water processes. Direct correlation between specific tuffaceous lithologies in the Gulf of Mexico to their specific Yellowstone sources will enhance the Miocene stratigraphic framework of the Gulf of Mexico.