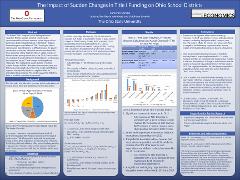 Through the 1965 Elementary and Secondary Education Act (ESEA), the federal government established Title I funding to target resources for districts serving low-income students. The reauthorization of ESEA in 2001 expanded the program’s funding significantly, making Title I the largest federal education finance program aimed at improving the achievement of low-income students, yet the impact of this funding on disadvantaged students is still heavily debated. Determining the causal impact of Title I funding on district spending and student learning is difficult because the poverty counts at the center of the funding formula are also correlated with these outcomes. This study exploits the fact that changes in federal student poverty counts due to the 2010 Census, which are unrelated to actual changes in district poverty levels during that same time period, led to significant changes in Title I allocations across districts. I exploit these changes in funding to implement an instrumental variables research design to determine the causal effect of sudden changes in Title I funding on Ohio school districts. This paper finds that sudden changes in Title I allocations increase total, state, and federal revenue initially, but in the long-run a local offsetting response subsequently results in a negative effect for instructional expenditures. The results suggest that Title I has little to no effect on student achievement.