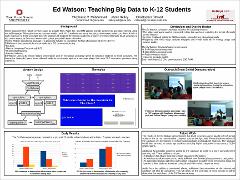 Online data-intensive (OLDI) services such as Google Now, Apple Siri, and IBM Watson provide answers to questions formed using natural language. Although these services are widely used, K-12 students are rarely introduced to concepts relating to them. A lack of early exposure to these concepts force the chances of students developing academic or career interests relating to OLDI concepts to rely on the exposure they may receive during their pursuit of higher education. The Ed Watson educational package is a proposed solution to counteract the lack of exposure at the K-12 level. Ed Watson introduces K-12 students to natural language processing (NLP) and inverted indexing using a 30 minute lecture presentation and an interactive Jeopardy! game. The interactive Jeopardy! game demo allowed students to compete against a computer player that used many of the same concepts they learned about during the lecture to answer Jeopardy! questions. The package was demoed to a group of middle school students. The group was surveyed before and after the package presentation to determine changes in the student’s attitudes about “big data” and their ability to answer technical questions about OLDI concepts. Early results showed a 54% increase in student interest in big data. Ed Watson also increased the number of students that correctly answered questions about OLDI concepts by an average of 60.5%. The result of this early demonstration showed the Ed Watson package’s potential in providing K-12 students with an early exposure to OLDI concepts. Additional demonstrations of the package will be used to develop a complete package that can be downloaded and used by instructors for their own students.