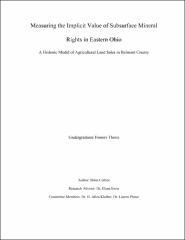 Shale gas development has proliferated in eastern Ohio, leading to questions about the economic impacts of the influx of entities seeking to explore and extract minerals in the region. A major source of economic gain for landowners in these areas is direct revenue from the purchasing and leasing of mineral rights by the mineral extraction industry. However, there is a history of mineral development in Eastern Ohio, implying the existence of split estates, situations in which the surface and subsurface rights for a given parcel of land are separately owned. While mineral rights are directly traded in the market, their implicit value as derived from the land and housing market may differ from this explicit market price. This paper attempts to evaluate the willingness-to-pay for a land parcel severed from the subsurface rights by estimating a hedonic model of agricultural land sales in Belmont County, Ohio. The findings of this research are inconclusive; while the dummy variable indicating the existence of a split estate is insignificant in all hedonic model specifications, measurement error and potential endogeneity may bias this result. However, other findings of the research corroborate the findings of literature in this subject area. This paper discovers a significant, positive relationship between permitted well density and sales price, and a consistently negative relationship between producing well density and sales price. These findings may indicate the existence of speculation in the land market, i.e., situations in which land in regions expecting payments for royalties and mineral rights appreciate in value, but those within the county where the development phase of shale production has passed are depreciating in value. Further research should focus on controlling for endogeneity and exploring interesting behavior discovered in land sales records, such as the observed propensity to buy full land parcels and split the estate shortly after sale.