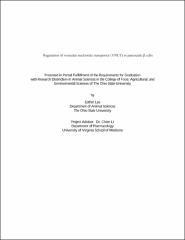 Vesicular nucleotide transporter (VNUT) is a protein found in insulin granules that facilitates the uptake of ATP and release of ATP and insulin. Studies show that suppressed VNUT results in reduced insulin secretion. Currently, the regulation of VNUT expression in β cells is unknown. The objectives of this study were to determine the effect of high fat diet (HFD) on VNUT levels and test if free radicals generated from HFD are involved in HFD modulation of VNUT expression in β cells. A mouse insulin-producing cell line (MIN6) was used for this study. The control group received growth medium treatment, and the test group received growth medium containing fatty acids palmitate, oleate, and linoleate (1:2:1 ratio). The cells were lysed 48 hours after treatment, and protein was extracted for western blot analysis for VNUT. To further determine the effect of HFD in VNUT expression, adult male mice were fed either a control diet or HFD (n=3/group) for one week. We sacrificed the mice and isolated islets from the pancreas for protein content. Western blot was run in both models for VNUT expression, normalized against the housekeeping gene α-tubulin. Results validated a correlation between HFD and reduced VNUT levels compared to control group. Secondly, we introduced the drug BAM15, a mitochondrial uncoupler which has been shown to reduce reactive oxygen species production from mitochondia. Three trials were conducted with MIN6 cells in the following treatment groups: control, HFD, HFD + BAM15, and BAM15 only. After treatment for two days, western blot was run to determine VNUT expression. BAM15 showed a trend to restore VNUT levels in HFD-fed cells. Additional replications are necessary, as results with the drug were not statistically significant. Results of this study and the role of free radicals on modulating VNUT expression could have implications for managing diseases where insulin regulation is impaired.