A Highly Disreputable Enterprise: Men-on-the-Spot and the Allied Intervention in the Russian Civil War, 1917-1920 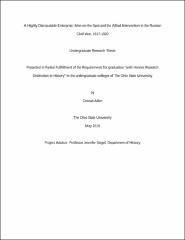 British and French foreign policy, unmoored by four years of war and foreign revolution, was chaotic and misguided during the Russian Civil War. In the absence (or sometimes in subversion) of guidance from governments at home, generals and bureaucrats embroiled far away in the total anarchy of the Russia took on the role of "men-on-the-spot" making decisions on the ground. These men-on-the-spot, influenced by their own implicit biases, turned a half-hearted campaign into a fully-fledged war on Bolshevism, which was only stopped by the war-weariness of Britain and France and the political ineptitude of their White allies. Even then, the end of the Allied intervention came not from direction from above, but due to the decisions of these military commanders in Russia. British commanders, however, were able to exert more influence over foreign policy then their French counterparts, who lacked the means to do so to the same extent. Like the expansion of European empires in the 19th century, Allied policy in the Russian Civil War lacked any grand strategy and was thus guided by the arbitrary and individualist decisions of these generals on the spot.