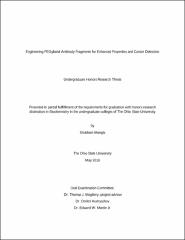 3E8 is an antibody that targets Sialyl-Tn, a glycan found exclusively on a subset of cancers called adenocarcinomas. This antibody is particularly interesting to the Magliery Lab because of its use in radioimmunoguided surgery, a modern cancer-detecting technique that allows surgeons to intraoperatively visualize and fully resect diseased tissue. Studies have shown that patient outcome is directly correlated to the surgeon’s ability to entirely remove the tumor; unfortunately, current full-length antibodies, like 3E8 have long serum lifetimes and poor affinity to Siayl-Tn. Consequently, we have engineered a smaller version of 3E8 called 3E8.scFv, an antibody fragment with a tunable serum half-life and affinity and stability nearly equal to full length antibodies. Previous studies have shown that the lifetime of 3E8.scFv can be optimized by attaching polyethylene glycol chains (PEGs) to the antibody, but not without decreasing its ability to bind to Sialyl-Tn. These PEGs, which react non-specifically with surface lysine residues on the fragment, may be responsible for the decrease in affinity of 3E8.scFv as they block the binding site. To determine which lysines are potentially problematic, variants of 3E8.scFv that contain mutations to selected lysines will be engineered. These variants will be characterized and studied using a variety of techniques to locate a more stable form of 3E8.scFv that can be non-specifically PEGylated. In contrast to non-specific PEGylation at lysines, the specific PEGylation of 3E8.scFv.Cys (3E8.scFv with a C-terminal cysteine) will also be studied. A variety of techniques, including gel filtration, surface plasmon resonance, differential scanning fluorimetry, and analytical ultracentrifugation will help investigate the biophysical effects of singly PEGylating 3E8.scFv.Cys with PEGs of different shapes and sizes. The ultimate goal of this project is to create a stable single chain variable fragment with a completely tunable serum half-life by PEGylation (non-specifically or specifically) for use in radioimmunoguided surgery and imaging. In addition to its use in vivo, 3E8.scFv can be used in pathology labs to help detect and diagnose adenocarcinomas. The Magliery lab has engineered a variant of 3E8.scFv called 3E8.scFv.FLAG that contains a C-terminal FLAG tag for immunohistochemistry. Numerous chemistries involving this antibody will be tested and analyzed to develop a sensitive and reliable technique for staining adenocarcinomas.