Quaternary Sediment Sources to Hemipelagic and Contourite Depositional Settings off the Iberian Margin, IODP Sites 1385 and 1391 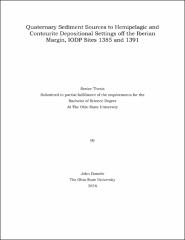 Expedition 339 of the Integrated Ocean Drilling Program (IODP), located on the western Iberian Margin and the Gulf of Cadiz, gathered sediment cores in order to investigate the Mediterranean Outflow Water (MOW) and its paleoceanographic significance on the North Atlantic Ocean climate and circulation history. The rapid sedimentation rate from the MOW allows for a detailed look at the sedimentary record. Aboard the JOIDES Resolution, sediment cores were collected at Sites U1385 and U1391 and analyzed by using the X-diffraction (XRD) method to determine their bulk mineralogy. In this study, the shipboard data were processed using Paleontological Statistics (PAST) software for principal component analysis. This analysis identified covariations among minerals, thereby defining mineral assemblages that could be used to determine sediment origin. At Site U1385, the three most important principal components defined four mineral assemblages that included chlorite, plagioclase, K-feldspar and augite. At Site U1391, the three most important principal components defined five mineral assemblages consisting of chlorite, K-feldspar, plagioclase, augite and aragonite. No definite correlation to the provenance could be made, but the mineral assemblages defined by principal component analysis are hypothesized to be the result of changes in grain size. The abundance of chlorite indicates the presence of smaller grain sizes carried by weaker currents, while plagioclase, K-feldspar and augite indicate silicic to intermediate continental source rocks and larger grains transported by stronger currents. The differences in associations of plagioclase and K-feldspar at Sites U1385 and U1391 suggest some differences in the sediment sources to these two sites.