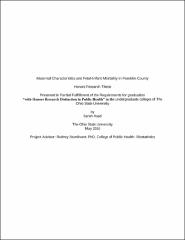 In 2014 the infant mortality rate in Franklin County was 8.4 deaths per 1,000 births compared to the national rate of 6 deaths per 1,000 births. There is much evidence in peer reviewed journals that suggests links between various maternal health characteristics and poor birth outcomes. Due to the high number of deaths in Franklin County, it is important to use the county’s data as a case study in order to learn more about the relationship between maternal characteristics and fetal-infant mortality. The objective of this study is to analyze the data set compiled by the Franklin County Fetal- Infant Mortality Review Program at Columbus Public Health. The program received birth and death records from the Office of Vital Statistics. The data collected about the mothers (n=279) includes demographics, previous birth history and socioeconomic status. In this study, four categories of death are analyzed: 1) fetal deaths (death before birth) less than 24 weeks gestation; 2) fetal deaths greater than 24 weeks gestation; 3) infant deaths (death under one year of age) during the first 27 days of life (neonatal); and, 4) infant deaths between 27 days and a year (post-neonatal). Analysis shows that the type of death is significantly associated (p<.01) with obesity and whether or not the mother is enrolled in the Women, Infants, and Children (WIC) program. This study also found that African American women experience fetal-infant death at a proportionally higher level than other races because they account for only 17% of births in Franklin County, but account for 43% of fetal-infant deaths. In conclusion, this data shows that more programming is needed in Franklin County—specifically, programming that focuses on healthy weight and proper nutrition during pregnancy while remaining culturally and racially focused.