Activism in Transition: Social Media Activism and the Contentious Politics of Social Change 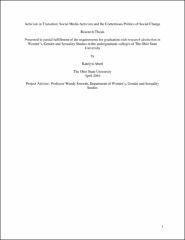