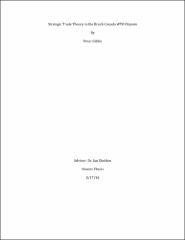 The market for regional jets is an excellent example of imperfect competition, with two firms, Canada’s Bombardier and Embraer of Brazil, competing for market share. In a market with non-cooperative rivalry, governments have an incentive to subsidize a domestic firm and thus increase its profits at the expense of a foreign firm. However, strategic trade theory tells us that subsidy competitions like the one between Canada and Brazil in the regional jet market are jointly suboptimal. Moreover, under the WTO’s Agreement on Subsidies and Countervailing Measures, subsidies meant to stimulate exports are illegal. In fact, Canada and Brazil both brought charges against each other at the WTO and won. Despite the jointly suboptimal nature of subsidies and the forum for dispute resolution provided by the WTO, the dispute between the two countries dragged on for years. The first aim of this study was to show that the use of export subsidies in the regional jet market was suboptimal. The second goal was to identify the factors that prevented an agreement to limit subsidies, based on reviewing literature on WTO disputes and studying the political and economic influence of the two firms. By using a simple calibration model my preliminary results show a combined net welfare loss for the two countries of roughly $260 million. Furthermore, my research indicates the WTO enforcement mechanism, the economic value of the two firms, and the firms’ political influence all contributed to intransigence and a delayed compromise. Although the WTO was never designed as a potent enforcer of its own rules, cases in which the economic importance of a firm translate to enduring non-compliance undercut both the legitimacy of the WTO and the free trade regime it supports.