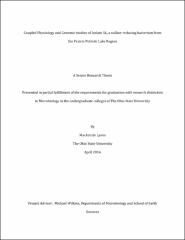 The prairie pothole region of North America, covering approximately 750,000 km2, contains millions of small lakes that are important systems for regional carbon and sulfur cycling. Prairie pothole lake (PPL) sediment pore waters contain some of the highest dissolved organic carbon concentrations ever measured in freshwater ecosystems. Sediment and pore water samples from the PPLs of North Dakota were used to anaerobically enrich for sulfate reducing bacteria (SRB) and fermentative microorganisms. Given the high sulfate concentrations characteristic of PPL pore waters, we suspect that SRB play an important role in coupled carbon and sulfur cycling, while fermenters degrade more complex carbon substrates into labile compounds. A range of medias, enrichments, and methods were used to cultivate and isolate representative microorganisms, with growth monitored through assays and epifluorescence microscopy. As a result, isolates 1L (a SRB growing with sulfate and lactate) and YPD1 (a fermenter) were obtained. A BLAST search of the 16S rRNA sequence from 1L revealed that it was closely related to Desulfovibrio magneticus. While Desulfovibrio sp. 1L tolerated elevated sulfide concentrations (up to 6mM), salinity of growth media was a strong constraint on growth. The genome of YPD1 showed the isolate to be Proteinoclasticum ruminis. Future studies will continue to analyze the genomes of these isolates and determine their role in PPL sediments through planned experimentation. Studying the interactions of these isolates with other key microbes in the community such as methanogenic archaea will provide insight into key processes driving carbon and sulfur cycling in the environment.