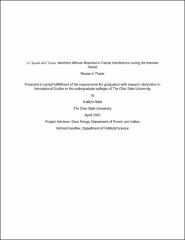 Both academic and popular writers tend to agree that Italy failed in colonization and propaganda abroad—a failure most starkly explained by Italian military actions in Libya. Enough evidence exists, however, to conclude that subversion by the fascist regime helped to spread Mussolini’s “empire” in an unexpected way: by influencing social movements and nationalist regimes during the interwar period in certain Maghrebian countries, namely Tunisia and Egypt. The Tunisian anticolonial movement, for example, is not traditionally viewed as being strictly “fascist” until one considers the covert interactions between Tunisian nationalists and Italy. In this context, it becomes clear that Tunisian elites were taking advantage of the fascist regime, and may have even appropriated aspects of European fascism. Egyptian student groups and governments were particularly important in openly appropriating aspects of Italian fascism and cooperating with the regime despite fascist brutalities in Arab countries. In Libya, however, fascism was highly unpopular, and Italian military actions there damaged fascism’s reputation in the Arab world in general. Given the outcomes of Italy’s presence in these three countries, my project answers the following questions: what was fascism, a European movement, doing in the Arab world? Why was it allowed to exist in Tunisia and Egypt but rejected in Libya? And what tangible effects did the influence of fascism have on the regimes of Egypt, Tunisia, and Libya? By using the interference of Italian fascism as a sort of case study, my project demonstrates that the nationalist movements in each respective country were the largest impetus in movements that interacted with European systems and were actually more significant than the Pan-Arab movement. The nationalist movements of the Maghreb, therefore, were neither “pro-Europe” nor “anti-Europe.” Rather, they could utilize aspects of whatever European system seemed most beneficial, which, to Tunisian and Egyptian elites, was fascism.