The Optokinetic Response of Fishes to Different Levels of Turbidity 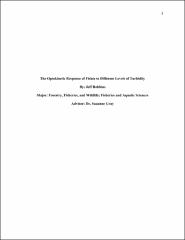 Many fish need light to school, reproduce, and forage. Without enough light penetrating into an aquatic system fish may not be able to accomplish these tasks, thus compromising their ability to persist. Turbidity, or suspended particles in the water, is a serious global problem due to increased run-off from urban and agricultural activities. High turbidity has the potential to reduce light to a point where fish are unable to detect the visual environment. The first objective to this project was to develop an optomotor response apparatus for testing the visual abilities of fish under increasing turbidity. Due to the optokinetic response, fish will swim with a rotating black and white grating until the turbidity reaches a peak where they can no longer sense the white striations, at which point the fish can no longer see the gradient and stops swimming (i.e. detection threshold). Under the parameters of 8 rotations per minute, striations 35 mm wide, and broad-spectrum lighting 15 individual fish showed responses to the rotating gradients. For the second objective, I used the optomotor apparatus to test the detection threshold under increasing turbidity for Pseudocrenilbrus multicolor victoria, a widespread East African cichlid fish that experiences extremes of human-induced turbidity. All fish that exhibited the optokinetic response (n = 15) were tested for a turbidity threshold. Males showed a significantly higher turbidity threshold (mean ± s.e. = 61.94 ± 3.03) level compared to females (mean ± s.e. = 52.64 ± 2.92). This research is beneficial because it can be applied to many different fish species experiencing increases in turbidity above natural levels and may contribute to our understanding of the mechanisms of population declines associated with increased turbidity.