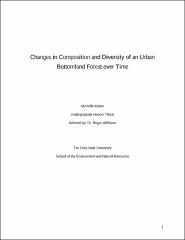 The loss of biodiversity has been major conservation concern around the world as a result of urbanization, increasing deforestation, and agriculture use. This project aims to inventory and assess the vegetative diversity of a local 12 acre bottomland hardwood forest community located in the Schiermeier Olentangy River Wetlands Park and historical forest data that was summarized from original public land survey records. Biodiversity surveys were conducted in two parts, with trees and herbaceous surveys completed in fall 2014 and another herbaceous survey completed in spring 2015. Shannon’s diversity index was calculated using species presence and absence data. Results from both surveys found a mean diversity of 2.07 for the forest community with diversity between the surveys not significantly different. The comparison between current and historical tree diversity was shown to be significantly different (p=0.001) with the historical diversity being higher. This suggests that the forest composition has been drastically altered and the succession of the forest could have been influenced heavily by natural and anthropogenic factors. Studying forests under this condition provides a basis for managing fragmented forests with potential for improved health, amenities, and ecosystem services and processes in an urban landscape. Management options based on the analysis of historical and current data are discussed further within the paper.