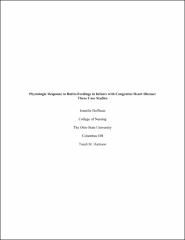 Neonates with congenital heart disease (CHD) commonly experience feeding difficulties and, thus, are at increased risk for altered growth and development. Physiologic stability during feedings is a concern for this population who often lack suck-swallow-breathe coordination and may expend more energy than consumed in a feeding. The purpose of this study was to describe the physiologic response of neonates with feeding. In this multiple case study design, single bottle feedings were observed on three infants with various heart defects requiring surgical intervention within the first month of life. Heart rates, respiration rates, and oxygen saturations were collected before, during, and after feeding. Feeding skills were assessed using the Early Feeding Skills assessment tool (EFS). Compared to baseline, two infants’ heart rates were elevated during the feeding and remained elevated throughout post-feeding. In these two infants, oxygen saturations dropped slightly from 88% at baseline to 85% in one infant during feeding and from a baseline of 85% to 75% in the other infant post-feeding. The third infant showed little change in heart rate and oxygen saturation throughout the feeding. The two infants who demonstrated concerning physiologic responses also had lower scores on the EFS. Physiologic instability with a repeated and critical task such as feeding is an urgent concern for neonates with CHD. Further research is needed in neonates with CHD to describe feeding skill and physiologic responses to feeding in order to develop better interventions to promote feeding success. Since breastfeeding is associated with more adaptive physiologic responses, research needs to include comparisons between bottle feeding and breastfeeding in this population.