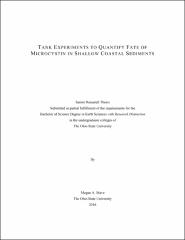 Harmful algal blooms (HABs) have become more prevalent within Lake Erie since the mid-1990s. Microcystin is one of the most common and harmful toxins associated with HABs, yet little is known about its attenuation and fate in the environment. Microcystin is a cyclic heptapeptide with 2 variable L-amino acids, which differentiate between the over 60 variants of microcystin known. Variants have differing toxicity profiles, the most toxic being microcystin-LR, which contains leucine (L) and arginine (R) amino acids. The goal of this thesis researchwas to determine whether wave-driven benthic exchange accelerates the attenuation of microcystin in shallow coastal waters using laboratory wave tank experiments. Sediment was collected from Western Lake Erie and incorporated into a 110-gallon tank. A solution consisting of both a conservative chloride tracer and microcystin-LR stock dissolved in water was added to surface water at the start of both a Wave Trial and a Non-Wave Trial, and concentrations were monitored over time in surface water and shallow pore water. Results show that wave conditions had a significant impact on exchange rates of conservative chloride, mixing the system over 30times faster than stagnant conditions. Microcystin concentration in surface water and pore waterdecreased faster than chloride, likely due to sorption to sediments, degradation, or both. It is crucial to better understand microcystin attenuation and mechanisms responsible in order to accurately predict the severity, duration, and extent of algal toxin plumes, which negatively affect the health of coastal ecosystems and economies.