Genetic and Biochemical Analysis of Trm10 and Trm10 Homologs in S. cerevisiae 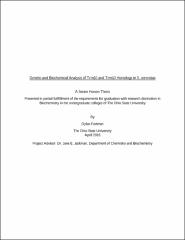 Transfer RNAs (tRNAs) depend upon proper tRNA editing and modification, as well as proper secondary and tertiary folding in order to be stable and correctly functional within the cell. One such tRNA modification is the methylation of guanine at its N-1 position to form N-1 methylguanosine (m1G), found at position 9 (m1G9) in multiple cytoplasmic and mitochondrial tRNAs from Eukarya and Archaea. In the budding yeast, Saccharomyces cerevisiae, m1G9 is produced by the enzyme tRNA methyltransferase 10 (Trm10) on at least thirteen different tRNA substrates. Interestingly, multiple (up to three) different TRM10 homologs are encoded in metazoa (including humans), but the reason for the presence of these variants is currently unknown. However, the widespread conservation of Trm10, as well as the recent identification of disease-causing mutations in one human homolog (TRMT10A), suggests that this enzyme plays a crucial role in biology. Therefore, the overall goal of this project was to investigate the biological function of nine diverse Trm10 homologs. Deletion of TRM10 in S. cerevisiae does not cause obvious growth defects on normal media, but the trm10Δ strain is hypersensitive to the chemical 5-fluorouracil. Taking advantage of this hypersensitive phenotype, we identified three eukaryotic TRM10 homologs that could substitute for wild-type yeast Trm10, as measured by their ability to provide resistance to 5FU when expressed in S. cerevisiae. Among the six non-complementing homologs, two are of significant interest because western blots revealed that they were abundantly expressed in yeast, suggesting that the lack of complementation is not due to defects in expression in S. cerevsisiae. Instead, for these two genes (one each from human and mouse), we hypothesize that the resulting enzymes do not methylate the same thirteen tRNAs that are normally substrates for yeast Trm10, thus leading to the inability to complement the growth phenotype on 5FU. Preliminary primer extension data for the three eukaryotic TRM10 homologs that could substitute for the loss of wild-type Trm10 suggest that there are specific tRNA substrates within the cells that must modified in order to provide 5FU resistance.